The Benefit of Virtualization

Unless you live under a rock, you must have recently heard of the word virtualization and how it has so many benefits attached to it for businesses of all sizes.

The boiled down concept behind server virtualization is really all about gaining more from what you already have. Virtualization allows a business to make one server act as if you have ten or even twenty virtual servers. The demand to do so has become more apparent as processors have increased, meaning they are often underutilized, and have excess capacity.

By using VMs, you can improve productivity and efficiency. No joke! A typical server may use 10-20% of its computing power and 20-30% of memory at any given time; the rest ends up being dumped and is considered to be wasted. By using a VM system, you can increase to 65-75% easily.

So what is virtualization anyway? 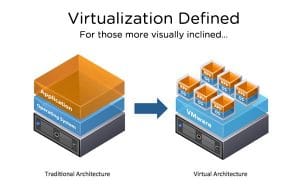 So what is the benefit of going virtual?

The major benefit from server virtualization for smaller businesses is not having to buy more servers that will take up space. By consolidating the physical servers onto one, they can dispense with several of their existing machines and load everything onto one server — or move from 10 physical servers down to only a few. This means less money spent on powering multiple servers, and less time on maintenance.

A recent study in the United States shows that a quarter of all small businesses have virtualized at least some of their servers and have significantly increased the return on investment (ROI) of their IT in 2014. 73% of other companies report that they are beginning to invest or plan on deploying the technology sometime this year.

The main components of reason for the virtualization decision were replacement of aging hardware, server consolidation, improved backup and disaster recovery, greater efficiency of IT infrastructure, and reduced IT operating costs.

How can CTI Technology help?

On the basis that your business appears to be able to benefit from server virtualization, you will obviously need some specialized support to make sure you achieve your business goals. With the support of CTI Technology, we have a team of experienced engineers who will not only spend time listening to what you are trying to achieve, but also provide independent technical expertise to specify the best solution to meet your needs.